BrightStar Care CEO and Co-Founder Shelly Sun—arguably one of the nicest people in all of franchising—was recently named 2017 Entrepreneur of the Year by her alma mater, Haslam College of Business in Knoxville, Tennessee.

At its annual gala, Haslam College awarded Sun for her substantial achievements in both the franchising and healthcare industries.

Sun started BrightStar Care in 2002, and 15 years later the Chicago-based healthcare company has become one of the leading companies in a category many industry watchers expect to grow far beyond its current roster of franchised healthcare providers. BrightStar focuses on home care for homebound patients and medical staffing.

Since its inception, BrightStar has grown as a rapid rate, especially since deciding to franchise the business in 2005. 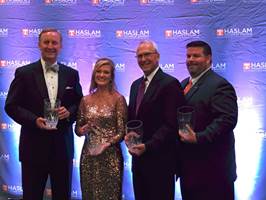 “My hope was to be able to help families everywhere by taking care of more mom and dads, grandmas and grandpas across the country, Sun said. “Today, BrightStar Care is a large operation in more than 300 markets and $400 million in revenue each year.”

Sun’s vision for the company was to provide franchisees the opportunity to run the business on a local level and to select and hire the best caregivers. She was featured on CBS’s Undercover Boss TV show in 2012, and later decided to write a book to share her ideas and experiences with other entrepreneurs.