Caregiving Can Be a Tough Job, but This Woman Is the Best

“Caregivers are born, not made.” – Carol Mass.

Three days a week, Olivia Michel works a 12-hour shift – 9 a.m. to 9 p.m. – as a caregiver for an elderly couple in Granada Hills. It’s a tough, demanding job with a modest paycheck, but the benefits are great.

Every morning, she gets to look in the mirror and like who she sees.

Michel’s been caring for the couple a year now, and until a few weeks ago she thought nobody really took notice of her work, but then she got a call to come to the main office. The president of the company she works for, BrightStar Care of the San Fernando Valley, wanted to talk to her.

Why would that be, she wondered? Wasn’t she doing a good job? The elderly couple and their children seemed to like her. Had she done something wrong?

She needed this job. Her two children were in elementary and middle school now, so she could finally go out into the workforce and earn some money to support them.

Why would the president of the company want to see her?

To throw her a surprise party and let her know that from thousands of caregivers nationwide she had been chosen as the Western Region Finalist for Caregiver of the Year, a major honor.

Michel shed a few tears, and said a few words thanking everyone, then she received a big hug from Carol Mass for helping her parents live out the last years of their lives comfortably and safely in the only place they wanted to be – home.

“She’s pro-active, she’s committed, and she’s loyal,” says Mass, who asked that her parents’ names not be used out of respect for their privacy. “The sense of relief Olivia has given me and my siblings, you can’t describe.”

Mass lives in Mission Viejo, 80 miles from her parents home. She visits them once a week and spends a good part of the rest of the week caring for their needs – setting up doctor’s appointments, stocking their house with delivered food and supplies, and making sure all the bills get paid.

But she knows it is Michel who does the heavy lifting – the caregiver waking her parents up in the morning, caring for them during the day, and tucking them in bed at night before she goes home to her own two young children.

“Both my parents are very independent, and both can be reluctant at times to accept help even when it’s obvious they need it,” Mass says. “Olivia is so respectful and calm with them. She understands.

“I think sometimes it’s hard for the people who receive the care to always understand that. She’s caring for dad, but mom’s in the picture as well with some memory loss.”

Her 95-year-old father is a proud man who was a serious body builder in his youth. He spent many hours working out on Venice Beach with Joe Gold, who would go on to open the mecca of body building, Gold’s Gym.

“Dad has membership card No. 1 in Gold’s Exercise Club, which is what it was called before it became Gold’s Gym,” Mass says. “He and mom were into exercise and health foods beginning all the way back in the ‘50s. They’ve spent their lives taking care of each other.”

And then last year, into their home walks a stranger to do all the things they used to do for each other. Do you accept her or ignore her? It’s a question every caregiver faces. 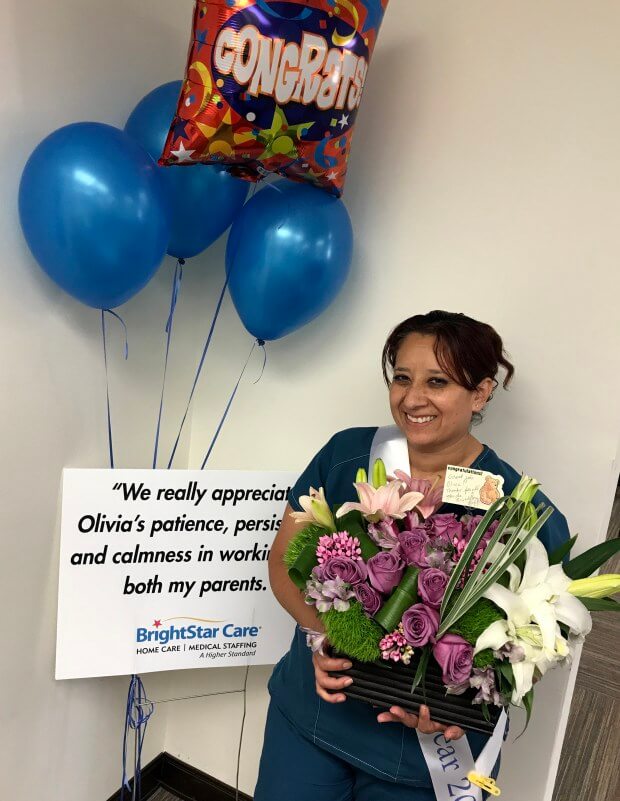 “Olivia had to be very patient with them, win them over,” Mass says. “She’s not only done that, but she’s part of the family now. She allows them to live the life they want to live and do the things they can continue to do.”

It may sound easy but it’s a hard line to draw, Michel says. All the years she spent as a stay-at-home mom caring for her own two children, both with medical conditions, gave her the on-the-job training to become a compassionate caregiver.

“You have to give it all of your heart and be ready to experience different personalities and different cultures – to make sure all their wants and needs are being taken care of,” Michel says.

Mass thinks good caregivers are “born, not made,” and it’s true, but Michel needed all those years caring for her own sick kids to really understand the emotional care, as well as the physical, this job takes to even be considered Caregiver of the Year.

“It’s true, sometimes caregivers don’t get acknowledged for the job they do,” she says. “It’s usually the doctors, surgeons, and nurses in the hospital who get recognized, and they should, but what about the people who help a person after recovery? The caregivers.

“Aren’t we important, too?”